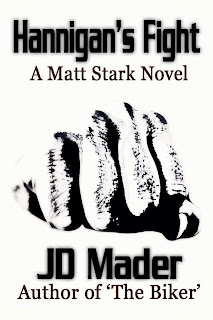 Hannigan sat his elbows on the old, wooden bar. He could see himself through the amber bottles. His beard was full. Grey. He looked like Santa Claus. A starving Santa Claus. He smiled at his friend Mick behind the bar. Mick splashed another dose of Jameson’s into his glass.

The dream was nonsensical, but vivid. Beneath the veil of color and noise, he could see himself. There was a haze of cigarette smoke … faces, blurry, floated through the miasma. He could see himself, but he didn’t recognize.
The Hannigan in the dream was scared. His shoulders were slumped. He looked tired, like he was reaching for a rope and falling short. He was lifeless.
There were shuffling sounds from somewhere. Then the world tilted, and he was looking into a face he had only seen a few times, the first time when Matt had beaten him in the alley. The last time when he had stood on Bernal Hill and watched a man die: the man who had killed Matt’s father. Still, he could see the face clear as day. Matt Stark. He did not look afraid. He looked like he was carved from stone. Then everything turned a very blood red. Hannigan opened his eyes and saw Mick smiling at him.
“You dreaming of the devil, mate?”
“Argh … nah, mate. Dreaming of a good friend. Why?”
“You were shaking and twitching something awful.”
Hannigan looked around him and saw a clean, empty bar. He looked at the clock. 3 a.m.
“Shit. Sorry, mate … I must be getting old. What do I owe ya?”
“Nothing you haven’t paid a hundred times over.”
Hannigan smiled, rapped a sore knuckle on the bar, and headed for the door.
The fog had set in, and the air was cool. It took the edge off the hangover that had been steadily building. He looked at the sky. He thought about the dream and shrugged it off. He flexed his aching hands and cursed.
He saw a quarter on the ground and stooped to pick it up. Then, screeching tires, and a bus stop exploded behind him, scattering glass. Hannigan hit the ground hard and rolled. He saw the back of a red corvette just as it rounded the corner. Then, Mick was beside him.
“What the fuck was that, mate?!”
“You’ve got me, Mick …”
“You know who it was?”
“Well, judging by the phallic nature of the car in question, I could take a guess.”
“I’ll call the cops, mate … come back inside.”
Hannigan stood up and dusted himself off.
“No, brother. Thanks. If that was him, the bar needs no part of it. I’d guess he’s done.”
“For tonight, maybe.”
“Maybe … never can tell about these kinds of things.”
Hannigan didn’t tell Mick that he wanted to be alone. He had been fighting his whole life, but he had never been shot at. Until now. He looked at the bus stop, pulled his collar up and walked home.


The next day, there was a call to The Shannon Arms. A warning. Get lost or get dead. The rich boy had enough money to get it done. He had said as much. Hannigan thought long and hard, and then he did the only thing he could think of: he kissed his wife, went to the post office, and then got himself lost. He found a furnished apartment in Daly City and started drinking.

Hannigan's Fight is the sequel to The Biker. They don't have to be read in order, but it wouldn't hurt. The Biker is also available in paperback HERE. Thanks for your support!
Posted by JD Mader at 4:40 PM