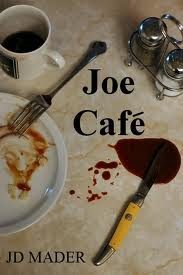 The sun was not up, but there was a glow through the morning mist.  It was already getting warm.  Michael ran his thumb up the cork handle of the fly rod.  It was an absentminded gesture.  Like stroking the stubble on one’s chin.  It was comforting and it was sensual.  He pulled out line and heard the ripping sound of the reel.  Without really thinking about it, he cast back and let the fly drop right into the center of a dark, quiet hole.  He watched it sit on the water.  The line lay perfectly, almost invisible.

The state cops had given up on the letter…the whole thing.  Not a decent print.  Nothing.  Michael knew he had to give up, but he couldn’t help thinking that it was his fault.  His job to guard the town.  His job to keep innocent friends from becoming targets and then bloody mannequins.  He saw that his fly was sinking and did a few dry casts before putting it six inches from where it had been.  He tried to stop his mind, but couldn’t.  He pulled out the flask and downed it in one gulp.  Recast.
Suddenly he was back in time.  Something he hadn’t thought about in years.  There was a girl in his class named Anna.  They were sixteen.  She had a hopeless and obvious crush on Michael.  She had indentations in the sides of her head and she was slow.  That’s what they called it then: slow.  He was always nice to her.  He knew it encouraged the crush, but she had enough kids throwing shit at her.  She was the butt of enough jokes.
It was a Friday afternoon.  He was passing the gym and he heard laughing.  He looked inside and saw two kids he didn’t know very well…one was a new student, a pudgy, shifty kid.  They were standing on either side of her.  They were throwing her shirt over her head and she was jumping for it and laughing.  She was not wearing a bra.  Her breasts were large and Michael was ashamed to be looking.  That was the first thought, but it was followed almost instantaneously by blinding rage.  One of them reached out and savagely grabbed a bouncing tit.  Anna screamed, and then he was walking.  If you could call it walking.  It wasn’t a run, but it was like the earth was pushing his feet forward.  He was momentum.  He covered the distance quickly and his rage grew with every step.
The two boys turned at the last second.  Their eyes were wide and their expressions confused.  Michael’s first punch destroyed the bigger one’s nose.  His second punch caught the wiry one in the throat and he went down making mud noises.  Michael kicked and kicked.  Things began to get blurry.  He was crying.  Then her hand was on his.
“It’s Ok, Michael.”
He panted.  Blinked.  Couldn’t talk.
“Michael.  We were just playing.  Don’t be mad, Michael.”
He looked at her innocent face.  Pink cheeks and childish smile.  He looked at the boys on the floor.  He realized they were hurt badly and recoiled in shock.  He wondered what he should do.  He knew they would never tell.  He shuddered.  He looked down at them squirming in their blood.
“If I ever…if anything like this ever…if I fucking…you evil motherfuckers…you evil, goddamn motherfuckers…”
He was crying again and Anna was pulling on his arm.  He shook his head fast to clear it and saw stars behind his eyes.
He walked her home and managed to calm down enough to speak.  He told her that she shouldn’t let boys see those parts of her.  She didn’t seem to understand, but she promised she would “be good”.  Her house was small and dingy.  All the windows were open.  It was hot.  Screen door flapping in the breeze.  He saw a man in an easy chair with a bottle beside him.  Anna ran to the door and waved.  Michael heard the man’s voice.  Harsh.
Then it was gone.  He was staring at the fly, which was just beginning to sink.  He blinked his eyes and the pool exploded.  He tried to set the hook, but he was too late.  He leaned the rod against a tree and sat down heavily.